The store will not work correctly in the case when cookies are disabled.

Over 40 Years in Business

CSH began in 1977, when Frank Rasmussen began building waterbeds in his Cedarburg barn. Frustrated with the inability to get all the parts he needed, Frank decided to make his own waterbed brackets. Seeing the need to help cover costs of the parts, Frank decided to sell the excess parts to other waterbed builders.

"I sat down with an 11x17 sheet of paper and laid out all of our products we offered... and created the first catalog," Rasmussen said.

In came the orders. The packaging and shipping department were Frank’s two daughters. As business grew, friends from high school joined in. 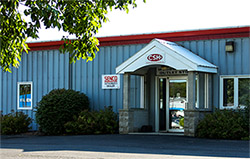 In the 1990's, Frank decided to sell a wider selection of hardware to cabinet and furniture makers. Frank began importing hardware, and also, manufacturing his own hardware in Cedarburg.

In the 2000's, inexpensive cabinets grew in demand. CSH responded by distributing Ready-To-Assemble cabinets to builders and homeowners. Their goal was to keep prices low, while maintaining high quality products. Several RTA cabinets are exclusively made in the USA, promising American-made quality and value.

Service is our Middle Name

CSH has a highly-trained, knowledgeable staff that is competent in helping customers with product orders. Working via phone and email, our team has the ability to work with you through the entire process of your renovation/building projects.

Communication is important to us here at CSH, especially while interacting with customers. We take pride in our ability to serve Spanish-speaking customers as well as Deaf and Hard-of-Hearing individuals.

Contact us during office hours 8 AM - 4:30 PM (Central Time), Monday - Friday. Whether you need installation guides, advice on which product is best for your application, or even to return a product, please call us at (800) 882-0009 and let us serve you!

If you would rather communicate via email, please fill out a contact form and we will get in touch with you as soon as we can.

When it comes to tools and hardware, CSH carries many well-known brands, such as Blum, FastCap, Knape & Vogt, Kreg, Rev-A-Shelf, and many more!

The best part? There is no middle man. We will give you the best wholesale pricing out there. Shop by brand name here.

From European hinges to cabinets to rolling ladders, CSH has all you need for your home improvement projects. We have over 50,000 products that are available for purchase either online or through our catalog. Take the time to search and see what is available on our website.

We are happy to offer the wholesale pricing in our website/catalog to any and all who find us.

We believe that by keeping our operating costs as low as possible, we can roll those savings right on to you. Pricing is subject to change and may differ from published catalog pricing.

CSH strives to ship as quickly as possible. Generally, items that are in stock will ship within 24 hours of order placement. Products ship via UPS Ground (unless otherwise noted) to which you will be informed.

We do our best to keep adequate supply of all products, however, in the case of a back order, you will immediately be informed, and we will continue to update you throughout the process.

See what our customers have to say.